Vitiligo is a condition where patches of skin begin to lose their pigment, resulting in the appearance of whitened splotches on a person’s body, which are especially noticeable if they naturally have a darker complexion.

There are actually ancient references to the disease from sources as diverse as papyrus scrolls from ancient Egypt, religious texts from Southeast Asia, medical literature from ancient Greece, and the Old Testament, which refers to a particular skin disease where the skin and hair turn white.

Vitiligo is actually more common than you might think, and many movie stars, singers, leaders, and cultural icons have suffered from this skin disease.

The King of Pop: Michael Jackson

Michael Jackson is arguably the most famous person of all time with vitiligo. The almost universally acclaimed King of Pop had a musical career spanning four decades, beginning with his family’s own music group, The Jackson Five, and ending with his solo career, during which he produced memorable hits like “Billy Jean,” “Thriller,” and “Beat It.”

But while we all remember Michael Jackson’s signature moves and energy, we also remember the controversial publicity he had to engage with over his entire life, and one element of that critical press was the condition of his skin. Critics complained that Jackson was a bad role model for black youth because they believed he was bleaching his skin to look white in order to facilitate his entertainment career.

On the Oprah Winfrey Show, Michael Jackson made a public appearance and clarified that he was not bleaching his skin, but that he was using topical creams and makeup to balance out a genetic skin disorder called vitiligo, which was de-pigmenting certain parts of his body. He expressed hurt about the belief of critics that he was masking his black identity behind white makeup, stated that he was proud to be black, simultaneously emphasizing his belief in the quality of all men, and most interestingly, opening up a public discourse about vitiligo for the first time.

Mark Althavean Andrews, more commonly known as R&B singer and rapper Sisqo, has had a successful musical career both as the frontman for the Dru Hill R&B group, and in his solo career.  While promoting the movie Snowdogs, which he starred in with Cuba Gooding Junior and James Coburn, Sisqo was reportedly wearing white protective gloves, leading many to conjecture that he was suffering from the same skin ailment that plagued Michael Jackson.

Sisqo revealed that the initial diagnosis of medical professionals who had examined his conditions was eczema, but that subsequent examinations have indicated a condition that leads to loss of color in the skin and hair, and can even lead to de-pigmentation in the retina of the eye and the mucous membranes: vitiligo.

Initially Sisqo had told New York’s Daily News, “I had this kind of rash, so I’m taking antibiotics. From what I understand, it’s from the stress.” Some have conjectured that this stress may have been related to the commercially unsuccessful flop of his album Return of the Dragon, a sequel to his four-time platinum Unleash the Dragon, which featured the song that made him a household name: Thong Song.

Winnie Harlow is a model of Jamaican descent who was one of the cast members of the television show America’s Next Top Model (1994). She was actually diagnosed with the disease at age four, and called various derogatory names from her classmates, such as a “zebra.” The teasing was so bad that she even had to quit school, and reportedly contemplated suicide. 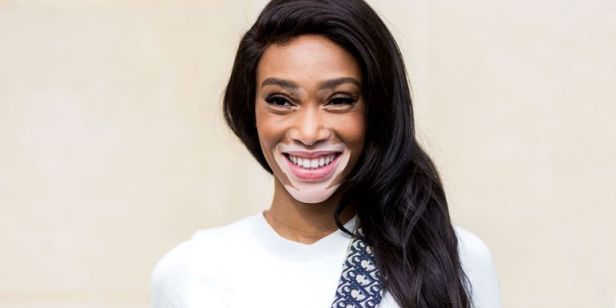 However, Model Tyra Banks discovered Harlow on Instagram, and although she was eliminated from the show early on, she was returned by popular votes from fans, going on to make it to 6th place. Harlow has also appeared in films and music videos with the likes of such stars as Eminem.

Harlow has also posted videos on YouTube discussing her skin condition, and answering questions about living with the disease. She has also spoken at TED talks, the Dove Self Esteem Project, and the Women in the World Summit.

Lee Thomas is a Michigan reporter who currently covers stories for WJBK Fox 2 in Southfield, Michigan. He also suffers from the skin disease, which has severely splashed his face with a number of white colored patches.

Thomas has not let the skin condition get him down, however. He’s a successful personality in the television world, covering events such as the MTV Awards.

All four of these celebrities have not let this disease shut down their chances for success, but have carried on and even reached the heights of entertainment, music, and modeling. Their response to their vitiligo challenge is inspirational for anyone facing a setback that seems impossible.